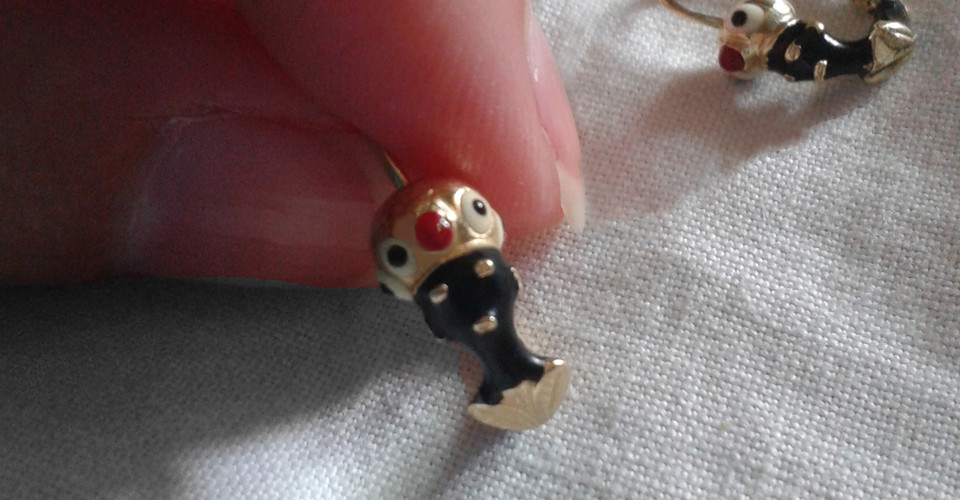 The most recognizable jewelry, moretto-shaped earrings are characteristic of Rijeka and Kvarner region. The influence of history and other cultures in these parts left their mark, evident in this jewelry of specific shape and legend. The beginning of wearing of moretto jewelry is connected to common women of Rijeka.

Moretto – primarily golden earrings, show the head of a black person with a white turban. It started as a modest version of the luxurious Venetian moretto, which is made of gold and jewels, originating from everyday life of the 17th and 18th century, where at the time the Venetian patricians were served by pages and servants, whose faces were coloured in black.

There are different beliefs related to the moretto. During the Turkish attacks, turbaned head was identified with the character of Turks, due to the turban that the Turks wore, but also for the rough appearance of the Asian warriors. Women in the Croatian coastal region started wearing the earring with the black turbaned character as a good-luck charm against the Eastern warriors known for their cruelty. Later on the fishermen and sailors started wearing the moretto in one ear, as protection against evil.

The first legend relates to the prayer of women from Rijeka, so the stones may start falling from the sky and kill all the Turkish attackers who were devastating Grobničko polje and seriously endangering the defense of Rijeka citizens who were defending their region. Allegedly the skies opened up and poured stones on the Turks, leaving white turbans on the fields. After that few men ordered for their wives moretto earrings, as a sign of gratitude.

Another legend originating from the island Pelješac says an Italian countess had a black maid whom she loved very much. She gave her freedom, and as a memory of her she ordered earrings with her character.

In late 19th ct. Rijeka developed numerous moretto masters specialized in making this jewelry, so the “mori” (another expression for the morettos) are getting the adjective “Rijeka”, for being autochthonous. Crafting moretto jewelry spread from earrings to other types of jewelry, such as golden rings, brooches, necklaces, needles and so on.

Apart from being autochthonous Croatian jewelry, moretto is primarily a trademark of Rijeka and Rijeka carnival, and the symbol of that region. At the carnival one can often see masked persons resembling of moretto.

The jewelry was later spread to other coastal parts, so it makes a usual offering of the jewelry shops along the Adriatic coast.

Hello! This is my first visit to your blog! We are a group of volunteers and starting a new initiative in a community in the same niche. Your blog provided us beneficial information to work on. You have done a outstanding job!

Thanks 🙂 Your comment is stimulation to work even better in the future.