Roasted dishes under the bell – who could resist them? 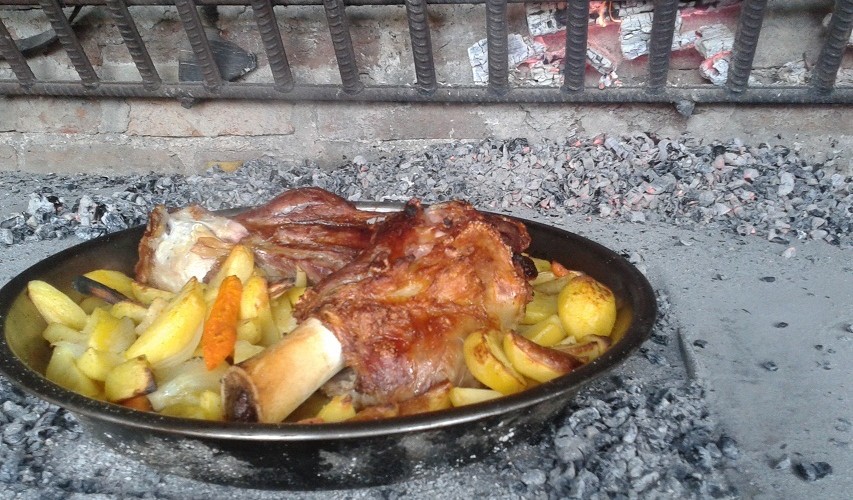 Roasted dishes under the bell, called “peka”, count among top traditional specialties of Croatian cuisine. It is almost impossible to write about this delicacy and not to be inspired by own experience when tasting and enjoying this dish.

Although I have never been fond of lamb, it was the very roasted lamb under the bell that has changed my mind and made a switch in my universe of gastronomy.

The roasted dish under the bell is so rich with juices and combined flavors that just right after the first bite you cannot stop, and the whole experience turns into a wonderful feeling of pure delight. And if I add to it the beautiful scenery of Canyon of River Cetina, even during the hottest summer days this indulging experience becomes even more enchanting, indulging this tasteful dish hiding in the shadows of this beautiful nature.

You who might be familiar with the beautiful scenery of Canyon Cetina just by watching famous movies of Indian called Winnetoo, authored by Karl May, I suggest you visit this beautiful place and don’t miss out the roasted dish under the bell, as a delicacy of this region.

History of preparing dishes under the bell

This traditional way of roasting has been known even during the times of the Roman Empire and Illyrians, who had been already familiar with this aboriginal culinary pot which was in the context with fire place and fire. In Croatia there are findings of clay bells in surroundings of city of Sinj, and in villages of Lika, Ripče and in old Illyric settlements of houses on stilts. Initially bells were used for baking bread under the bell, which nowadays as well still exists as a delicacy due to special flavor and scent. Although this kind of bread tastes great with other dishes under the bell, it can be served alone just with a few drops of virgin olive oil. Later on the dishes prepared under the bell have become more diverse.

Veal, lamb, chicken, or squids and octopus dishes prepared under bell turn into pure delicacies. Meat and fish or seafood perfectly combines with potato halves and various vegetables. Sunflower or olive oil sprinkled over ingredients heat up under the high temperature and mix with extracted juices creating an unique flavor that is one of the top “must try” in Croatian cuisine. If you want to get a Mediterranean flair you should definitely spice it up with some rosemary, bay leaves, even sage and soak it with high quality wine.

Although preparing a dish under bell seems like a piece of cake, it actually requires quite a few skills and good timing. Well prepared dish under bell, besides chosen ingredients requires a good bell, certain kind of wood for glow and ashes and skilled cook. First bells from old times were pretty basic, mostly made of clay, but later on they were improved and were made of more durable materials such as forged tin and iron.

Nowadays a good baking bell should have enough deep trays to collect juices and a bell which covers the dish with a ring of appropriate size to keep the ember. Enough ember and plenty of experience in adding the spices and pacing will guarantee the perfect combination of flavors and the right ratio of tenderness and crispiness.

And last but not least, preparing the dishes under bell are great occasions for family and friends gatherings. Priceless :).

Photo–materials after the first workshop