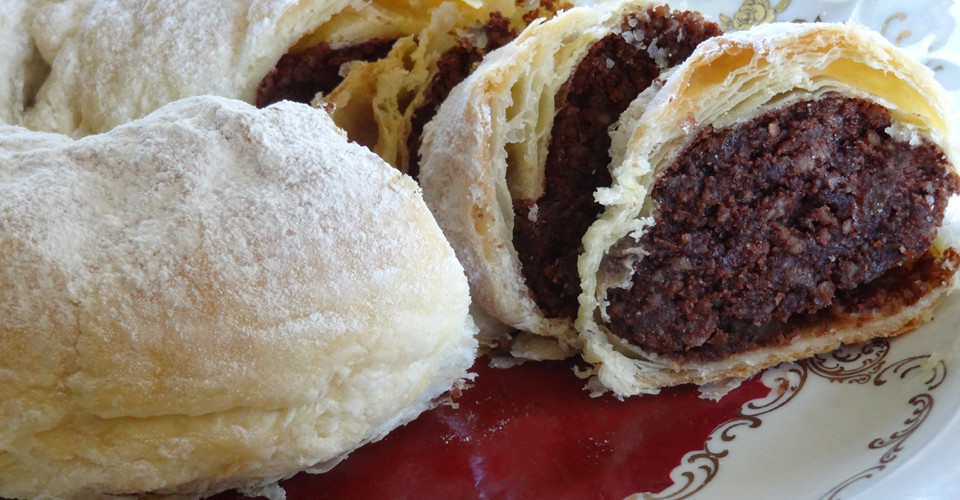 Historic notes mention Emperor’s presnac was served for the first time in Pula on 9th November 1856, when the empress Sissi, escorted by the emperor Franz Joseph I laid down the ground stone for the Arsenal district. Numerous renowned and unknown visitors enjoyed this particular dessert later in 15 coffee shops in Pula. Among them, first in Pula, and then later in Opatija, was also James Joyce.

Prepared from seasonal nut fruits, presnac presented a significant step forward compared to a poor peasant recipe, and with its appearance and ingredients it irresistibly reminded of an Austrian strudel. In late XIX ct. it was particularly popular in the area of Liburnia, where it was tasted in the Hotel Kronprinzessin Stephanie – contemporary Imperial Hotel, by the German emperor Wilhelm I, Romanian royal couple Karol I and Elizabeth, ballerina Isadora Duncan, writer A. P. Czechow and others.

Recipe for this remarkable tasting event is brought to us by Lidia M.

In a small bowl cook prošek with plum jam, pour over mix that you just prepared and mix it all well.

Roll the defrosted puff pastry on a flat floured surface to the size of 22×32 cm/8.66×12.60 in, x2, and distribute the stuffing on the longer side. Roll the strudel with the linked part turned downwards, close the edges, and then gently position in a spiral. Prick the pastry in several places with a fork.

Bake in a pan lined with baking paper, in an oven previously heated to 200°C (392°C) on the second level from the bottom, for about 35 minutes, until it becomes golden brown.

Serving
Sprinkle the cooled presnac with powder sugar and slice.
Serve with a glass of prošek or some other dessert wine.

Advice
You can reduce the amount of prošek by half, and replace it by the same amount of squeezed orange juice.