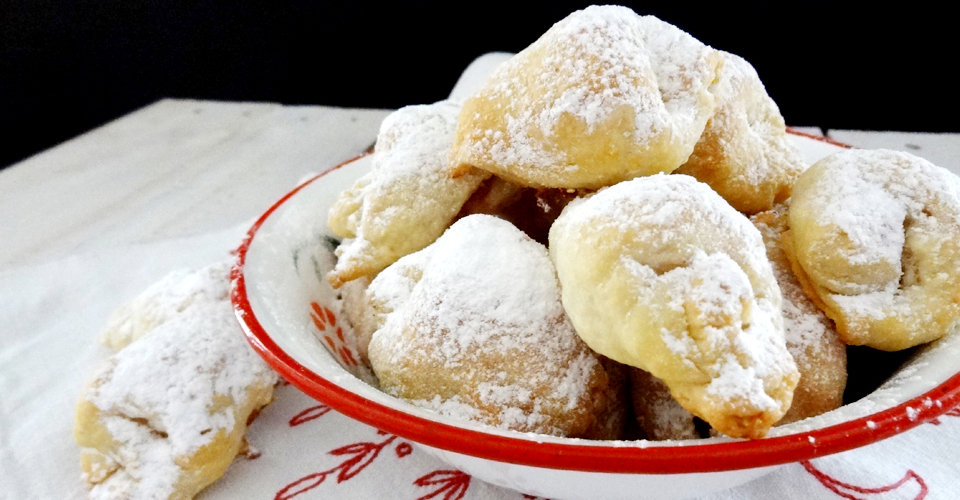 The very name of this cake from Slavonia hides one of the important ingredients in preparation of the dough – the lard. Coating the dough with minced lard and folding it, you get a crunchy puff pastry. Cut squares which are then folded in triangles hide the rich interior of home-made jam and sprinkled walnuts. Bon apetit!

Crumble the yeast, add sugar, milk and stir. Leave in warm place for about 15 minutes.

Mix the flour, salt, sugar, oil and raised yeast. Mix with an electric mixer, gradually adding milk until you get a smooth mixture (for about 15 minutes). Flour a larger bowl and put the dough to a warm place and let it rise until it doubles its volume.

Roll the dough on a floured surface and coat with a third of the lard. Fold the first half of the dough, then the second and beat a bit with the roller. Then fold again in half and finish folding the second half of the dough. Let the dough rest for 30 minutes. The repeat the procedure for two more times, until you have used up the lard.

Roll out thinly and cut into squares with a knife. Place a teaspoon of jam on every square and sprinkle with a half of teaspoon ground walnuts. Fold the opposite corners into a triangle and glue with hands. Then pull the corners on the longer side under the cake and twist once. Distribute the lard cakes onto a baking pan covered with baking paper.
Bake in oven previously heated to 200°C (392°F) for 15 minutes.

Preparation time
2 hours + time to raise and rest the dough