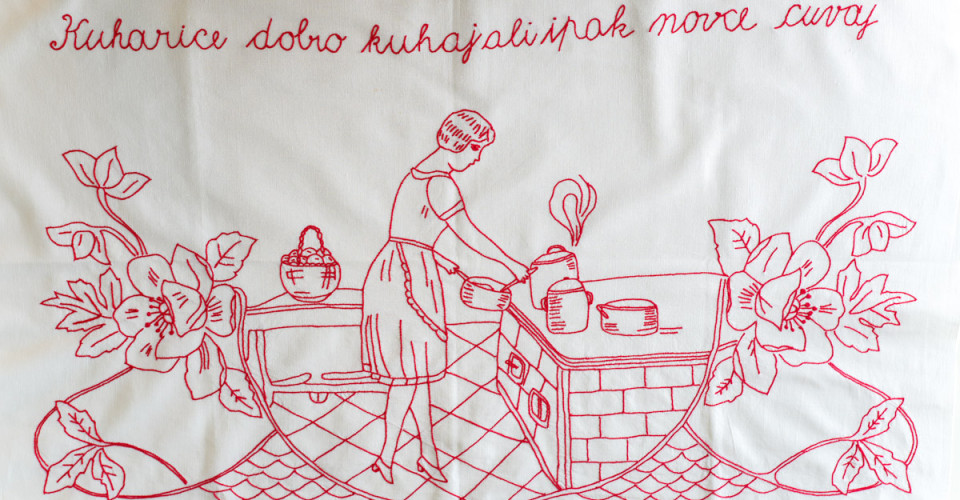 Originally called “zidnjak”, wall kitchen towels are white cloths embroidered with various motifs and messages. They would mostly be installed in kitchens, next to the stoves, when open fireplaces were replaced by closed stoves. Several decades ago they could be found in all countryside houses, and somewhat later also in urban homes.

Most often motifs were the kitchen and food, and they would usually hang on kitchen walls, because the kitchen was the center of all social happenings, family gatherings or entertaining guests.

Specifics about the wall embroidery were short and witty messages combined with a visual motif, and they would often speak a lot about the family members, their relations, attitudes and similar. At the time the wall embroidery was popular, information flow was very slow, so they should be perceived as communication templates of that past time.

This wall embroidery would commonly be made by women, mostly in winter time, when there weren’t that many outdoor activities. Patterns and schemes would be chosen according to own choice, as they would often reflect some personalities or life situations depicting family members, usually the housewives.

Embroidery technique with coloured basting thread on a white cloth, mostly square, on a pattern previously drawn using copy paper and pen, usually depicted the motifs of young women in a kitchen, flowers and animals with matching messages. There are those rich in various motifs and colours to simpler ones in one colour (red or blue) with a message.  Message themes also vary:  from funny ones, intriguing, to romantic and love ones. 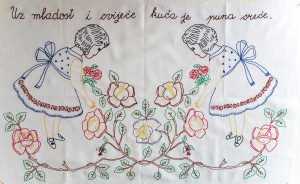 Apart from decorating walls and being a trendy element of interiors in a certain period, they were also a kind of communicators. Apart from having decorative function, they would also protect the walls from spattering during preparing food on stoves.Today they can be found in weekend houses decorated in rustic style or are somewhere archived as a heritage, reminiscent of some earlier times.