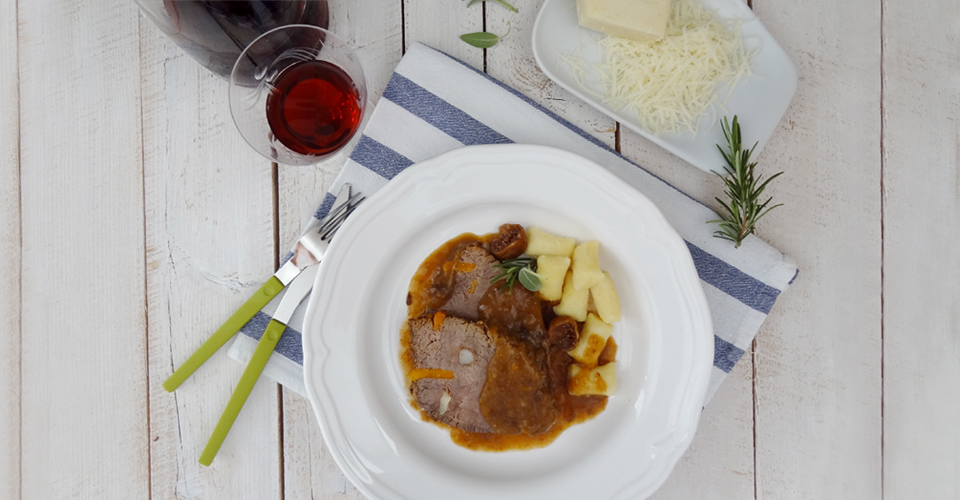 “Do you have a good recipe for pašticada”, I was asked by the manager of Kuhaona. Talking to me, a woman from Dalmatia, with long-years of service in the kitchen – and I am still thinking before I act – obviously having much trust in my culinary and gastronomic knowledge. I jump to the offer, and before I start the story on a pašticada recipe that I love, I have to repeat some of the numerous insights regarding this symbol of Dalmatian cuisine.

First and foremost – there are countless recipes for Dalmatian pašticada. There are those by “my grandmother, my mother, my mother-in-law”, from this and that restaurant. This and that city or island, by legendary Dika Marjanović, or numerous recipes from encyclopedia edition by Aldo Ivanišević “Dalmatian cuisine”… And who knows how long we could enumerate them. It is traditional that every family has the right one and it is always the best recipe. Because, like with any traditional meals; there is much more to it than just the recipe; there are memories of Sunday lunches, family celebrations, favourite persons and in the end, inerasable memories of home and home town.

Pašticada is basically among the meals which are prepared by long, slow cooking in liquid with ingredients and seasonings such as large amounts of onion and other root vegetables, which makes these meals significantly strong in flavour and aroma. “Goulash” has become a common name for such meat preparation technique (deriving from definitely the most renowned meal, related to Hungarian recipe. Naming all other meals prepared in such a way, such as “octopus goulas” or even scarier “lobster goulash”, is totally wrong). English cuisine has stew, French has ragout, Italian stufato, and we have – Dalmatian pašticada. True, this dish was brought to Dalmatia by the Republic of Venice, but over the centuries it has become so domesticated that it has become equally ours.

However, Larousse Gastronomique will provide us even more info on the method to get a good pašticada. Braise, brasare ili braseur is a meat preparation method, first fried golden on fat, after which it continues to be cooked covered in a small amount of well aromatized stock or with added root vegetables. Near the end of cooking, meal is additionally seasoned with burgundy, port, marsala, prošek red sweet wine… If in the process you are using oval or square shape pans, black, with lids which do not allow evaporation, these meals, after initial frying, can continue to cook in the oven at approximately 180 °C. This way today’s modern preparation is brought the closest to traditional preparation in stoves or on heaths.

Famous French Burgundy beef and its numerous derivations are prepared this way (English beef ribs, for example) and of course the entire line of pašticada recipes. Gastronomic culture of our Italian neighbours including a hundred years of written tracking and archiving of recipes which get a significant status of national and ethnic treasure – pašticada in Venice, Treviso and Verona, parts of the Republic of Venice, and today’s region Veneto is being tracked since the 15th century. Its variations are very much alike the one in Dalmatia (which most probably derives from them) for its cooking method and ingredients. Particularly appreciated is the one from Verona with horse meat (which is a real challenge for me since I can procure excellent horse meat), and flicking through old Venetian recipes I have come across a very intriguing marinating method which I have to try out on the first occasion. Pricked meat is braised with vegetables and seasonings to get a “nice” colour, poured with a liter of fine red wine, brought to boiling, after which the heat is turned off and all is left to be marinated for at least 12 hours. On the next day you add root vegetables (it is not specified – but I would still stew it a bit on the side) and it continues to be cooked – in that famous way – slowly, slowly until the meat is cooked.

The best is to serve gnocchi in a separate glass or ceramic bowl, if possible oval, so that there is not too many layers and so that they can be better seasoned. Place a few tablespoons of sauce to the bottom of the bowl and then distribute the strained gnocchi over its surface. Add a handful or two of parmesan cheese, which is definitely the best cheese for pasta and meat sauces. Its adequate replacement can only be a fine sheep milk cheese or a mixture with parmesan. Except for its flavours, it also aids in sticking of the sauce to their surface. Gently stir the gnocchi in sauce and serve.

Nicely cut pašticada meat covered with sauce is served in a special bowl or in a deep plate. It is not necessary for the meat to “swim” in too much sauce – you will use the majority for gnocchi. It is sufficient that the meat only be covered with sauce. Everybody can take out on a plate what they like most – someone takes gnocchi first as an appetizer, then takes slices of meat with some sauce, and with rich green mixed lettuce. Others may choose to eat gnocchi and meat at the same time, which are then used as a side dish.

Journalist by profession, culinary enthusiast by vocation. Travelling and living most of her life in Mediterranean countries, she added an excellent upgrade to her Dalmatian roots. She also compiled her experiences and meals from her family table into the book "Cooking fast and healthy".