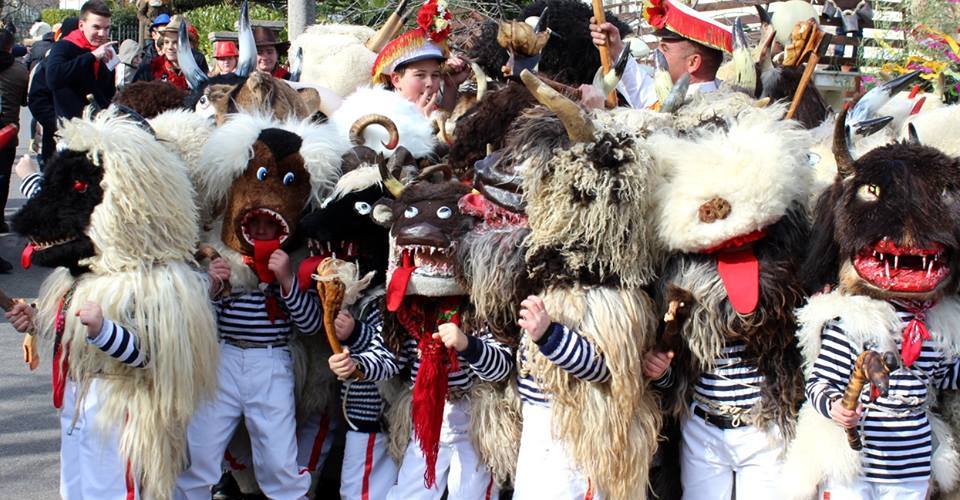 Crazy fun time and life under the masks in the period between the New Year’s and Lent is deeply rooted in our tradition. All over Croatia, masked groups of our ancestors for centuries have used noise, ringing, dancing and calous behaviour to chase away the evil spirits and the winter, and to call for spring, new birth and fertility.

Kvarner region would be visited by masked bell ringers in different masks who would make noise and spread terror with the bells they would carry around their waist. Some groups would wear horrible animal masks and sheep hides, while others would have non-masked faces, dressed in white trousers and blue and white stripped shirts with hats decorated with colourful flowers or long colourful paper bands. On their quests, bell ringers would get various groceries, such as eggs, different products of dried meat, and they would all be used to prepare traditional feasts to which all the townsmen were invited.

Except being masked as bell-ringers, men would attach a puppet and be masked as bisexuals, so for the Kastovština region there is a characteristic character called “who is carrying who”. Similar, bisexual masquers can also be seen in Lobor in Hrvatsko zagorje, and they are called “grandma carrying grandpa”. In Zagorje masks would mostly be worn by children, who would go around houses and extort gifts, eggs, doughnuts and money with their ritual dancing and singing. Specific “black” and “white” masquers are specific for the region of Sinj. “Black” masquers would be townsmen masqued in grandparents, while the “white” masquers would be a costumed wedding party, where men would take on womens’ roles.

Similar situation was also in Baranja where during Carnival there would be a rule of “scary” and “beautiful” “buše”. Scary ones would wear sheep hides, masks made of fabric or wood with animal horns and would make noise with sticks, rattles and bells. Beautiful “buše” were comprised of processions of young men in female robes and young women in men folklore robes. In Međimurje masquers would wear animal masks on their heads and look “bloated”, because the trousers and sleeves of their folklore uniforms would be stuffed with straw. Moreover, all the Carnival rituals would end up with a ceremony and torching of a puppet that symbolized all the evil and problems that happened in the past year.

Carnival period is also known for specific meals that would mostly be prepared on Shrove Tuesday. So in continental Croatia these would traditionally be meals of sauerkraut and sweet cabbage, especially sauteed with tomato juice. But the Shrove Tuesday is mostly renowned for doughnuts, specific dessert made of dough, baked in lard. Doughnuts would be baked without stuffing, or filled with jam, aromatized with lemon or orange rind, rum or fruit brandy. In the northern part of Croatia people would bake “fanjki” and along the coast kroštule and fritters.