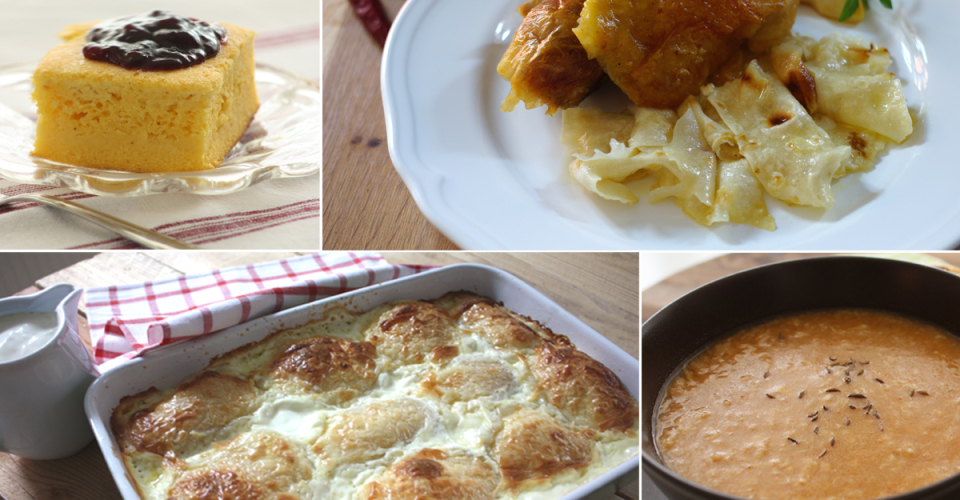 In the northwestern part of Croatia behind Mount Medvednica – exactly where its name comes from (Zagorje = behind a hill) – lies the region of Hrvatsko zagorje.
This predominately hilly region stretches over 2,300 km2 and is bordered by the Drava River in the north, the Sava River and Mount Medvednica in the south, the Sutla River on the west and Mount Kalnik in the east.

Written documents first mention Hrvatsko zagorje in the Middle Ages. It wasn’t until the 16th century that the region found its place on charted maps, even though the first traces of human settlements on the Hušnjakovo hill date back to the Paleolithic 130,000 years ago.

At that time the most notable attribute of Hrvatsko Zagorje were rather small and scattered villages in the border areas of feudal estates and rich castles and parks.

Life and the selection of food as it once was

A different way of life and creation has their mark in the culinary art. The everyday dishes were simple and modest, unlike lavish meals consumed during harvest time and field work, or church and other festivities. The type and the amount of food also depended on social class.

On the dining tables of the impoverished homes one could find cornmeal, cheese and cream, cracklings, pražetina (fried eggs with flour), beans with sauerkraut or beet, pumpkin soup and bloodwursts. The rich, on the other hand, would indulge in wood fired oven pork with spring onions, bean salad with pumpkin seed oil, roasted carp, roasted turkey and a variety of pastries.

Hrvatsko Zagorje has a rich tradition in soup preparation: everything from simple white flour, milk or cream soups with pieces of roasted bread and onions, to sour meat soups or a bit more refined snail or plum soups.

Due to combinations of different ingredients, the meat dishes are particularly interesting. The old recipe books contain meals such as beef with prunes stewed with wine, roasted pork shank with juniper served with sauerkraut, stuffed roasted capon with sauce, Zagorje turkey stuffed with chestnuts, giblets and sausage with mlinci (traditional pasta) and roasted goose with walnut stuffed apples.

Historical events and influences from other nations and cultures brought to Hrvatsko zagorje dough in the form of štrukli (cheesy pastry) and gibanica (cheese pie). Potato doe šiškrlini (dumplings) with poppy seed butter sauce and sliced yeast dough roll stuffed with poppy seeds are only some of the delicious desserts.

Homemade jam is used to decorate and favour crisp pastries in the shape of roses cut into cubes, stuffed with cow cheese and connected with the dough tips, as well as zlevanka – made with corn flour, cow cheese, cream and milk.

Cottage cheese, cream, buckwheat porridge, corn, turkey are just some of the foods that over time became the staple dishes in Zagorje’s kitchens and spread to other parts of inland Croatia.

Popular appetizers include baked štrukli, hajdini gibanek with wheat and buckwheat flour stuffed with pumpkin and cow cheese or baked mlinci with cheese and bacon.

Both restaurants and households like to prepare sour potato, smoked meat and mushroom and beans and tripe soups, as well as main dishes such as sirloin Stubica stuffed with dried plums in a dried plum cream sauce and roasted turkey with mlinci topped with fat left from roasting.

Grains are of great importance in the preparation of bread and pastries in the kitchens of Hrvatsko Zagorje. Even today people prepare simple poppy rolls from Trnovac Bartolovečki, zlevanka filled with walnuts or poppy seeds stuffing.

Authentic salty Varazdin clips hold a special place. Although the recipe is not a secret, it has been protected as intellectual property since 2005.

Proštenje (or Prošćenje) is a traditional summer church festivity that takes place in certain areas even today. It is a place to mingle with relatives and acquaintances, where various crafts and culinary specialties such as kotlovina are presented.

The rotisserie hat for kotlovina, used to prepare pork chops and sausages, is the authentic northwestern Croatian invention.

Proštenja are the place where even today one can purchase not only gingerbread cookies and licitar hearts, but also the authentic, colourfully painted wooden Zagorje toys, as well as beautiful handmade thread ornaments – Lepoglava lace.

Because of their uniqueness and value the traditional production of wooden toys, Lepoglava lace and licitar are included on the UNESCO Intangible Cultural Heritage.

So if you haven’t already, hit the road and explore the vast beauties of Hrvatsko Zagorje!

Fried Rafioli from the peninsula Pelješac