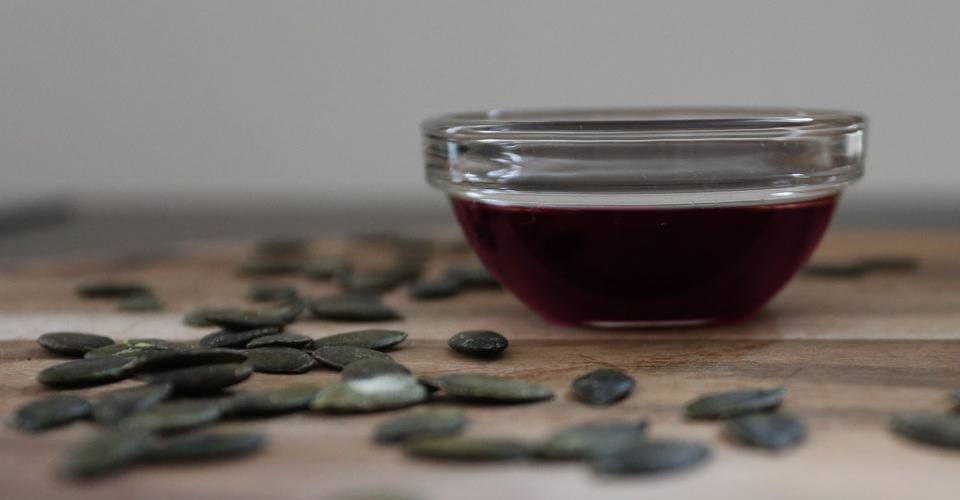 Although the range of pumpkin benefits is quite known, its essential part, the oil produced from the pumpkin seeds, needs additional emphasis.

The tradition of growing pumpkins took root in the continental part of the Croatia, where the pumpkin seeds were used as the first raw material for oil production, and therefore the production of the pumpkin seed oil is known in increasing number of continental family coops in Međimurje, Slavonia and Podravina counties.

Pumpkin seed oil of optimal density can be found in brownish red or darkgreen colour, hence the name emerald.

Carrying a different name in every region, pumpkin is a great source of culinary ideas, and the pumpkin seed oil is becoming an increasing discovery of nutritive and culinary value.

Among its nutritive values there is a large share of non-saturated fatty acids, minerals and vitamins, so is an excellent ally to health in prevention of many illnesses, as well as in strengthening the immunity.

In the culinary sense, due to its rich aroma, density and special flavour, pumpkin seed oil is best used without termic processing in order to preserve all the mentioned nutritive values. It enriches the wide range of meals as a topping for fresh vegetable salads, pastas, combined with fresh sheep and goat cheese, added to thick soups as a decoration and for achieving special aroma.

It is an obligatory ingredient in the potato or beans salads that go well with fish or various kinds of roasted meat.

Home-made bread or buns from fried pumpkin seeds flour, cubed and sprinkled with pumpkin seed oil, and served next to fresh goat cheese can be an irresistible snack or a cold appetizer.

A complete novelty is the application of pumpkin seed oil in desserts, where its particular aroma provides them with an original, velvet flavour. One such special treat is pumpkin seed oil ice-cream, served in an excellent restaurant in Međimurje county.

In any case, pumpkin seed oil in culinary and nutritive sense has a complete right to be popularized and discovered for everything it has to hide in its emerald beauty of taste and aroma.